Oliver Coburn’s book is the classic history of youth hostels in Britain.

Published in 1950, Coburn wrote about the first 20 years of youth hostels.  All the familiar history is there.  The predecessors of youth hostels in European travel, how youth hostels began in Germany, their beginning in Britain on Merseyside, the early break neck years of growth until the triumph of 1950 and their coming of age celebrations. 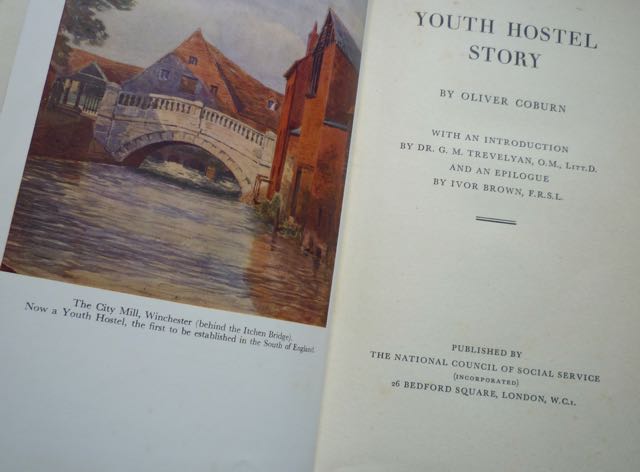 Coburn laid out the bones of a history that’s become the established story ever since.  He covers events like the opening of the first youth hostel in Britain at Christmas 1930 and the discovery of the City Mill youth hostel in Winchester.  Events like those have become part of a youth hostel mythology in part as a result of the prominence given to them by Coburn.

His style is relaxed and conversational, a little like an easy going fireside chat, full of anecdote and memory.  The book is well illustrated but it is worth checking when you buy on line as not all editions had illustrations.

I like the books chatty tone. He was writing at a time when all the main players, the people who started youth hostels in Britain and in Europe, were still alive. He probably knew Catchpool, met Trevelyan and could have spent time with Richard Schirrmann when the man who invented youth hostels visited Britain. He talked to Connie Alexander, the first youth hostel warden.

Coburn was a Quaker, one of the long list of those from the Society of Friends who played an important role in youth hostels in England and Wales. Others included TA  Leonard, who also founded the Co-operative Holidays Association and the Holiday Fellowship, and Jack Catchpool, YHA’s first national secretary.  Coburn had been in the Friends Ambulance Unit and worked with the Friends Committee for Refugees as did Catchpool..

He takes information from many sources, providing a rich picture for his readers. He quotes from hostellers and wardens as they were called then.  He covers the development of youth hostels in Europe, including the beginnings of the International Federation of Youth Hostels, and YHA as a countryside organisation.

Coburn wrote the book for the National Council of Social Services, the organisation that gave youth hostels their national start in 1930.

Paper back and hard copies of the book appear on ABE books and Amazon from time to  time.  Prices varied considerably last time I looked.